100% Islay is unique in that it is the only Single Malt in Scotland where every stage of the whisky making process, from the barley grown in the surrounding fields to the malting, distillation, maturation and bottling, takes place at the distillery.

As the 3rd Edition of Kilchoman’s 100% Islay, the Single Malt is a vatting of four and five year old fresh bourbon barrels. Only 10,000 bottles of the limited edition will be available worldwide and are expected to sell quickly.

With a delicate and floral nose of soft fruits and pear drops, 100% Islay goes on to explode with peat smoke in the mouth, complimented by a long, sweet and lingering finish that blends with the softer tones of peat smoke.

Anthony Wills, managing directorof Kilchoman,said: “The previous two editions of the 100% Islay range were extremely well received and we’re delighted with the way the Single Malt’s character is developing. The range is unique in that every stage of production, from barley grown to the hand-bottling takes place at Kilchoman. As a traditional working-farm distillery, 100% Islay epitomises what we’re all about.”

As with the two other core ranges in Kilchoman’s portfolio, Machir Bay and Loch Gorm, a new edition of 100% Islay is periodically released as the whisky matures. A number of limited edition single casks are also released each year.

With an ambition to take whisky production back to its traditional roots, Anthony Wills built and founded Kilchoman Distillery in 2005 on a farm situated on the rugged west coast of Islay. The first distillery on the island for 124 years, Kilchoman is one of the smallest distilleries in Scotland and one of only a handful left that still practice the traditional floor malting method.

The Kilchoman range is available from The Whisky Exchange. 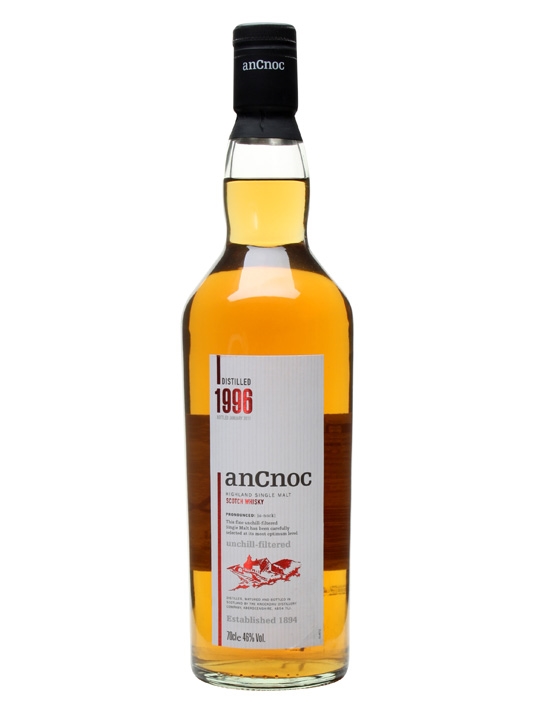 70cl / 46% / Distillery Bottling – Replacing the 1994 in the an Cnoc range from Knockdhu distillery, this 1996 vintage has been bottled at 46% without colouring or chill-filtration.